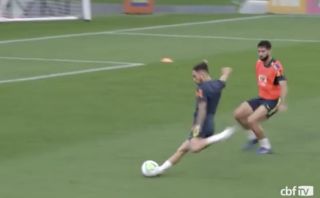 Manchester United left-back Alex Telles is back in action for his country Brazil after a spell on the sidelines following a positive COVID-19 test.

Telles, 27, joined United during the summer from Portuguese side FC Porto in a move which cost the Red Devils £13.5m, as per TransferMarkt.

Despite making his competitive United debut against Paris-Saint Germain during the Reds’ Champions League opener last month, the 27-year-old has been forced to miss all his new side’s games since.

Telles received a positive COVID-19 test which ruled him out for two weeks, the result was confirmed on ManUtd.com.

However, with COVID-19 now behind him, Telles has returned to action for his country and has been training ahead of their next set of international fixtures.