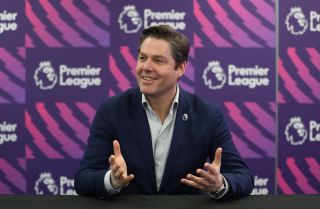 The Premier League Chief Executive Richard Masters has rilled the ‘Big Six’ after playing down the need for a change back to five substitutes — two more than what is currently allowed for league matches.

Sky Sports ran a report on Monday using perspectives from Liverpool manager Jurgen Klopp and Man City boss Pep Guardiola. They both argued that there should be five substitutions allowed during matches, like it was permitted after the restart last season.

Neither Klopp or Guardiola believe it offers an advantage to big clubs. Instead they have decided to push for it on the grounds of protecting players.

The 2020/21 season is more congested than ever in terms of fixture scheduling, and Manchester United’s Ole Gunnar Solskjaer let his feelings known about that on Saturday following our 3-1 win at Goodison Park. Solskjaer was angered by the fact United had to play a match on Saturday afternoon, despite playing away in Europe on Wednesday night.

However, as per The Sun, Premier League Chief Executive Richard Masters has refused to back plans to bring back the five substitution rule.

“There is an argument that five substitutes changes the competitive balance of a football match.

“We’ve had two votes on it at club level and both have been conclusively supportive of returning to three subs.

“I don’t see that changing for the foreseeable future. It’s been voted on twice.”

If the clubs had a choice to vote on it already — not once but twice — why are managers in agreement that 5 substitutes are needed as opposed to three?

Solskjaer addressed the issue two weeks ago, saying (via GOAL): “I don’t understand and cannot believe that the vote went against that because we have to look after the players and think about the players.

“This season is the most demanding season of all. I can see the point why clubs voted against but if you take a step back and think about these professional footballers and their mental and physical health the only sensible solution would have been to give us the opportunity to rest a few more.

“We have already seen loads of injuries in the Premier League. Pep has been talking about it, other managers too. We as managers, as clubs, as medical staff, we have to look after them, that’s why we have to rest players at certain times. So, yeah, I would liked to have had five subs.”

I can’t imagine players being opposed to this, so it makes me wonder if all clubs consulted their staff before making a giant decision.

Football club owners being out of touch is a common trend and the fact it’s been voted on twice at club level weakens any argument Klopp, Guardiola and Solskjaer put forward. Even if you agree with them!

The Sun adds that this has left the traditional Big Six in the Premier League ‘furious’.