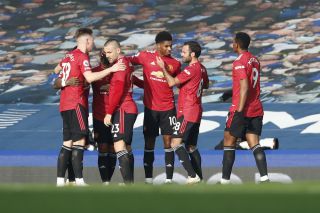 Luke Shaw is injured and will now miss the next four weeks of football.

Ole Gunnar Solskjaer confirmed Shaw’s injury after the 3-1 win over Everton on Saturday, though no timeframe was place upon his return but it did seem that we were preparing ourselves for bad news.

The official Manchester United website have now addressed the situation by confirming that Shaw has been ruled out for a month.

Shaw was in terrific form and had registered assists in back-to-back games, including the cross Bruno Fernandes headed home against Everton.

Now there will be more pressure on Alex Telles ahead of his Premier League debut because people will be expecting the Brazilian to perform against his first appearance for the club against Paris Saint-Germain.

Shaw, 25, now faces around four weeks on the sidelines.

He could miss matches against West Brom, Southampton and West Ham in the Premier League and PSG, RB Leipzig and Istanbul Basaksehir in the UEFA Champions League.

Solskjaer was right at the weekend when he spoke about the FA not helping the English clubs out.

Here’s how United fans reacted to Shaw’s injury on Twitter:

When #MUFC have backups!!! pic.twitter.com/7xvEevJg38

Damn and he’s been brilliant for the time being. I hope it’s just 4weeks so we can have Telles and Shaw have a healthy competition.

The tragic story of Luke shaw: Puts in great performances and then gets injured. So glad we got Telles now

Are u thinking what I’m thinking ?? pic.twitter.com/n2LsNeQdZZ

Bad news. Has been a pivotal part of the squad lately. Thank god we have Telles!