Manchester United fans are craving continuity and that needs to be found in Ole Gunnar Solskjaer’s selection after the international break.

United face West Brom at Old Trafford on their Premier League return next Saturday which offers them an ideal opportunity to arrest their woeful home form.

West Brom are 18th in the table without a win this season and Solskjaer’s men should be confident on the back of a gritty away victory over Everton that alleviated some of the mounting pressure on the Norwegian.

Unfortunately, Solskjaer won’t be able to name the same eleven that performed so diligently at Goodison Park after it was revealed Luke Shaw will face a lengthy spell on the sidelines.

As per BBC Sport, Shaw is out for up to a month with a hamstring injury.

But Alex Telles is on international duty with Brazil and will almost certainly make his home debut after recovering from coronavirus.

Telles was impressive in his only appearance against Paris Saint-Germain and will provide an exciting attacking outlet on the left-flank as the Reds search for goals.

Solskjaer should remain with the pairing of Victor Lindelof and Harry Maguire who defended stoutly against Everton.

Fred and Scott McTominay provided relentless energy and enthusiasm in a midfield pivot and deserve to retain their place.

As Gary Neville noted after the Arsenal defeat, Solskjaer has to be cruel to be kind to some of his players to find a balanced system  and the underperforming Paul Pogba isn’t likely to start.

The almost indispensable Bruno Fernandes was back to his decisive best on his last outing and is likely to support Marcus Rashford and Anthony Martial who is back from suspension in attack.

Juan Mata started on the right-flank against Everton after Mason Greenwood’s omission but Solskjaer has the opportunity to try the under-utilised Donny van de Beek in the position against West Brom.

Similarly to Mata, van de Beek does not provide natural width on the flank but he could link well with Fernandes and offers more defensive output than the Spaniard.

Solskjaer is yet to find a position where van de Beek can gain regular game time but he certainly has the assets to be effective on the right-flank. 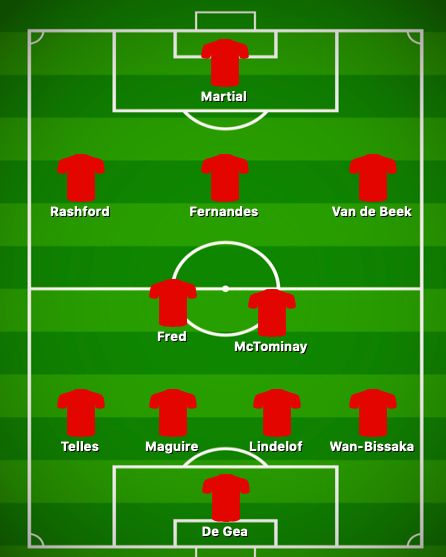