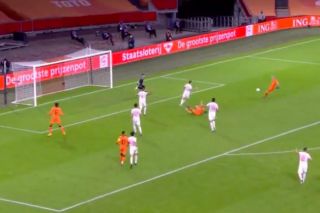 Donny van de Beek has scored an equaliser for the Netherlands in their friendly against Spain in Amsterdam.

Ole Gunnar Solskjaer’s reluctance to give van de Beek game time since his arrival at Manchester United has been puzzling, but the midfielder continues to impress when given the chance to shine.

Van de Beek started in an attacking midfield role tonight and netted with a clinical volley to pull the Dutch level just after half-time.

The ball fell kindly to the under-utilised United man at the far post and he struck his effort sweetly past Spanish ‘keeper Unai Simon.

The equaliser is Van de Beek’s second goal for the Netherlands in two games after he netted in the last international break against Italy.

Van de Beek has performed well in his rare opportunities early on in the season for United and he has proved yet again why he is too good for Solskjaer to leave out.

The Norwegian boss clearly does not see versatile Van de Beek in his best side at the moment but it would be increasingly bizarre to see a summer signing of such quality continue to dwell on the bench after the international break.

READ MORE: How Man United should line-up against West Brom with after Luke Shaw injury