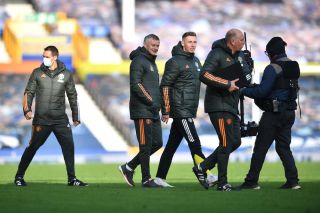 Dimitar Berbatov believes Manchester United players have kept faith in Ole Gunnar Solskjaer, but has identified an important problem in some of their lacklustre showings.

Saturday’s 3-1 victory over Everton alleviated much of the mounting pressure on Solskjaer with the Norwegian’s managerial credentials again questioned in the wake of another inconsistent start to the season.

United’s home form in the league has been horrific, with three defeats and ten goals conceded at Old Trafford in four games.

But the one constant in an erratic spell is United’s proficiency on the road; the Reds have won each of their last seven league games, a feat last achieved by Sir Alex Ferguson’s side in 1993.

United’s away perfection is keeping Solskjaer fighting at the moment but the start to the campaign has prompted more questions than answers as he looks to find a solution to squad imbalance.

Berbatov has reiterated his belief that the players still support their manager, but feels they can be left defensively exposed in matches which ultimately costs them results.

“It’s like United need to be under pressure to produce a winning performance,” Solskjaer told Betfair, as quoted by the Metro.

“But there’s only so long you can operate like that – they won’t produce the win every time the pressure is piled on.

“In the end, it isn’t going to finish well if they continue being so inconsistent. The team needs to find consistency and produce good football game after game.

“I still think the players believe in Solskjaer and they like him. I think he has their trust and they have his. There’s something that just isn’t working right in games when they are losing.

“The problem for me is, sometimes when they don’t have the ball they have a lack of mobility to chase and get the ball back. ‘

“Overall, though, I believe they’re still playing for the manager and they all like each other. But sometimes that’s not enough and to be 14th in the table isn’t good for United.

United’s lack of mobility is one of a number of issues facing Solskjaer but the vivacious Fred certainly lifted energy levels against Everton.

The Brazilian midfielder has his fair share of critics among the club but he brings enthusiasm, runs relentlessly and seldom lets the club down in big games.

The inclusion of the likes of Fred and more mobile players will make United look less lethargic as Solskjaer looks to settle on a team that can finally provide some consistency after the international break.