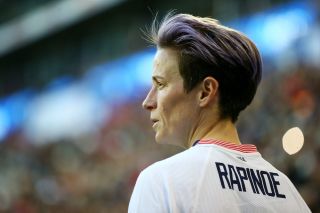 USA Women’s team star Megan Rapinoe has launched a savage attack on Manchester United as she considers the Reds’ efforts to launch a female side too little, too late.

Rapinoe, 35, currently plays for Seattle Reign Women is a fully fledged international for the USA’s national side.

The American attacker who won the FIFA Women’s 2019 World Cup Golden Ball has recently spoken about what could be in store for the future of women’s football.

Speaking in a recent interview with the BBC, the 35-year-old addressed how women’s professional football in the States is similar to here in the United Kingdom, she said: “I think women’s football in England is the same as in America – it is so far behind because of what we’ve had to overcome in the lack of investment.”

However, in a shocking rant, Rapinoe went onto use United as an example of why she believes the women’s game is so far behind the men’s, she said: “It’s 2020. How long has the Premier League been around? And we’re only just seeing a club like Manchester United put effort and pounds towards a women’s team? Frankly, it’s disgraceful.”

Nothing to do with the standard of play then, Megan?

United launched the club’s current women’s team at the beginning of 2018 and are currently top of the WSL table and unbeaten with 16-points from six matches during the 2020-21 season.

Going onto address her own personal hopes for the future, the American pro said: “I’ve had a few team-mates go abroad and play, while I’m training and trying to keep fit in the hopes that eventually we’ll be out of this hellscape.

“I want to keep playing. I’m definitely not anywhere near retirement – I absolutely want to play at the Olympics.

“After the Olympics I’ll have to take a longer look at the next three years. We’re a year closer to the next World Cup and it’s pretty enticing. We’ll leave that one out in the open…”