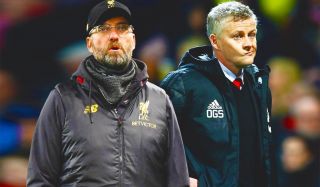 The bosses at Sky and BT Sport are bemused with Ole Gunnar Solskjaer and Jurgen Klopp, according to reports.

The topic was brought to the table this weekend after Solskjaer’s post-match rant after Manchester United’s 3-1 win over Everton at Goodison Park.

United travelled to Istanbul in the UEFA Champions League midweek and were given a lunchtime kick-off on Saturday. You’d ought to be crazy if you think that is fair on the players who are being asked to play more games in quick succession than ever before.

Liverpool manager Jurgen Klopp felt the same way about the situation as Solskjaer. He backed the German by airing his frustration at the matter following Liverpool’s 1-1 draw with Manchester City at the Etihad Stadium, as per Manchester Evening News.

“I spoke about two weeks ago, a meeting with a person at the Premier League who organised the fixtures. We cannot change it. It is not about Manchester United, Liverpool and City. These things should not happen,” Klopp said on Sunday.

The Daily Mail claim that Sky and BT Sport are utterly bemused by the situation because both clubs allegedly had sufficient warning and room for input when it comes to making up the calendar.

Whatever United signed up for at the beginning of the season, this is a call for common sense and it is not fair on the players who only made it back to Manchester at 4am on Thursday morning. They had to return to training on Friday and then play a must win match on Saturday afternoon.

Solskjaer is right. The authorities are setting us up to fail.