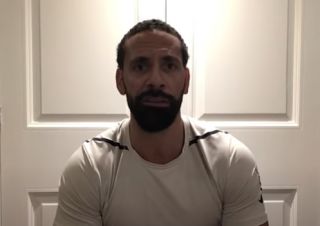 Rio Ferdinand has come out with a strong defence for Ole Gunnar Solskjaer.

The Independent went as far to say Pochettino wants the United job last week as pressure built on Ole Gunnar Solskjaer after a run of questionable results.

Ferdinand shares the view that the speculation doing the rounds shows “disrespect” to Solskjaer.

United have yet to win from four Premier League matches at Old Trafford this season, so they really need to address their home form if any objectives are to be met this term.

Solskjaer’s side got back to winning ways on Saturday afternoon with a 3-1 victory over Everton. We trailed 1-0 early on but Bruno Fernandes scored two in quick succession and assisted Edinson Cavani for his first United goal to make it 3-1 against Carlo Ancelotti’s men.

However, former defender Ferdinand insists there is no truth in claims United were in contact with Pochettino recently.

“Man United needed a huge performance and a result this weekend,” Ferdinand said on his FIVE YouTube channel. “The pressure was absolutely on this team and the management, they went out there and produced.

“In the media, there’s been bit of disrespect to Ole Gunnar Solskjaer to be honest. People touting about that Pochettino has been spoken to.

“I’ve got it from a really, really, really good source that there’s been no conversations and they wouldn’t disrespect Ole Gunnar Solskjaer in that manner. I feel like that should be addressed.

“We can all say ‘so and so will be good or better’, that’s just part of the game. But to say someone has been spoken to and is coming in imminently, when it’s not true, I think that’s out of order.

“The man is in the job and his team have found a knack of always pulling a result out when they need it and this was no different, they were solid.”

Rio, “Bit disrespectful to Ole Gunnar Solskjaer if I’m honest, people chatting about that Pochettino has been spoken to and stuff. I’ve got it under a really really really good source that there have been no conversations or anything like that going on.” from r/reddevils

Ferdinand must accept that Ed Woodward has a reputation for this sort of thing. United went behind Louis van Gaal’s back to hold discussions with Jose Mourinho before the Dutchman won the FA Cup, and he was still fired.