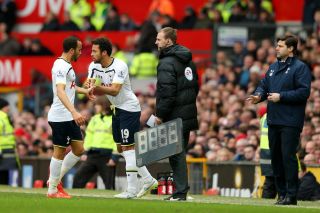 Having previously described himself feeling “bitter and angry” Pochettino during his time at Tottenham, Townsend did say in the same interview that he would “always be grateful” towards the former Spurs boss.

What Townsend previously said about Pochettino:

“It didn’t end well and people probably think (he and Pochettino) hate each other but I’ll always be grateful,” Townsend told The Athletic. “I was too young to take his messages on board.

“If he likes you, you would always be in his office. His first season, I struggled with confidence, form and fitness. I went from the main man at Spurs to struggling to get in the team. I was in the office every other week, going through clips. He spent so much time trying to get me back to where I wanted to be.

“I may have been bitter and angry at the time and resented him, but after time passes you realise I was in his office with him telling me how to improve. For the most part, we had a really good relationship.

“I needed a change, though — to move on, go down and step back up.”

However, Townsend is now talking about his ex-manager taking charge of United.

Rio Ferdinand made a valid point on a recent podcast of his that it’s disrespectful to constantly reference Pochettino while Solskjaer is trying to turn things around at Old Trafford.

I couldn’t agree more, but maybe Townsend knows how much this would mean to Pochettino.

“Poch is incredible,” Townsend told talkSPORT. “I think the Man United job would be perfect for him.”

Townsend added: “Ole’s doing well but do United want to miss out on a world-class coach?”

🔴 “Poch is incredible… I think the Man Utd job would be perfect for him.”

🙏 “He’d nurture the young players at Utd like he did at #THFC.”

😬 “Ole’s doing well but do Utd want to miss out on a world class coach!?”

Andros Townsend says Pochettino would be a success at #MUFC. pic.twitter.com/Hn02didVdX

Let us know your reactions to what Townsend said in the comments section.