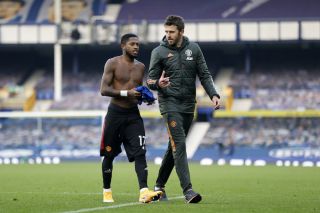 Manchester United star Fred has improved again this season, building on the impressive form he showed last term and reminding fans Ole Gunnar Solskjaer was right to put faith in him after a difficult start to life at the club under José Mourinho.

Fred’s importance cannot be understated when he’s the engine in the current United side, and never one you could criticise for not putting in an effort.

At the moment it looks like Solskjaer is sticking with Fred and Scott McTominay in his midfield, which will always have room for the team’s talisman Bruno Fernandes.

And now Paul Pogba is being left out in the cold.

But Fred is arguably United’s most in-form midfielder bar Fernandes.

@GoalAnalysis on Twitter have provided statistics for Europe’s most intense pressers in 2019/20, which includes Fred and fellow United teammate Jesse Lingard.

This certainly helps explain why Solskjaer fancied Fred in the first place, but still makes you wonder why he was overlooked so bluntly by Mourinho.

Fred’s not the best midfielder in Europe but he’s a useful player, and will be an important player for United this season.