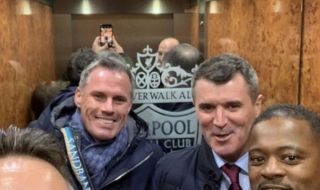 Keane, who works as a pundit for Sky Sports said that Manchester City’s Walker was a ‘car crash’ and an ‘idiot’ for giving away a penalty in his side’s recent match against champions Liverpool.

Jurgen Klopp’s Liverpool travelled to the Etihad last weekend in a game which had early title implications and despite the match ending in a 1-1 draw, Keane didn’t hold back in his criticism for City’s right-back.

However, despite recent criticism, ex-Liverpool man Carragher has emerged as an unlikely figure to leap to Keane’s defence.

Speaking live on TalkSPORT earlier this evening, Carragher said:“The first time I worked with him was ITV, I’d never spoken to him.

“I went down to breakfast and he was there on his own, shock! I spoke to him for about an hour and he was brilliant.

“You hear stories about characters at different clubs and you don’t know what they’re like until they come to your club.

“Roy Keane was one when everyone said he was a hot-head, then he was fine.

“I think he’s one of the best pundits out there, he is the master at the one-liner, getting straight to the point.

“That’s his style as a pundit and he’s the best at it, I love working with him. It keeps you on your toes.”

Carragher went onto admit he would love to socialise with Keane more often and recalled a Christmas staff party the pair attended, he said: “I would love to have a beer with him but he doesn’t drink.

“He came on the Christmas night with Sky, he didn’t drink but he was still there, he didn’t shun what was going on.

“He’s a team man and he got involved.”