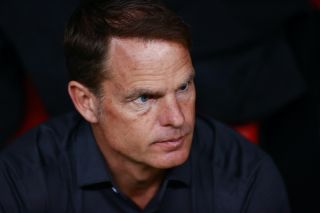 Van de Beek, 23, joined United from Ajax earlier this year in a move which could cost the Red Devils up to £39m, as per Sky Sports.

Since his arrival in the summer, the versatile midfielder has been subject to some criticism after appearing not to be a regular first-team starter.

Van de Beek has failed to start a single Premier League game so far during the new 2020-21 season which has prompted pundits and fans alike to question why the Reds bothered to sign him.

However, despite only starting four matches in total in the Champions League and League Cup, van de Beek has been directly involved in two goals.

The Dutch great, who spoke in a scheduled press conference via Voetbal International (as quoted by Manchester Evening News) said: “Of course I try to give him as much confidence as possible, I also showed that by letting him play against Italy.

“He did a pretty nice job. He is also doing well at Manchester United, but they have a fantastic midfield.

“That’s difficult too, but Donny will still get to play enough.

“Of course he wants more, but you also have to get used to a different competition.

“He will experience that too, let’s hope he will eventually get game minutes. In any case, he is equipped, so we can use him well.”

United will next be in action against West Brom in the Premier League on November 21 with van de Beek hopeful he can get his first domestic start of the campaign.