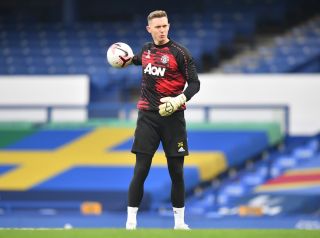 Dean Henderson could leave Manchester United on loan in January, as the club reportedly delay their decision over what to do with Sergio Romero.

That’s according to EPSN who report that Romero wants to leave Old Trafford.

Henderson is said to be content with his role at United for now but could leave to get regular game time again, like he did at Sheffield United for two years but with Wolves credited with an interest.

I would be surprised if Sheffield United didn’t show interest if the Reds are happy to loan Henderson out to another Premier League club. He knows the club and they’ve struggled in comparison to when he was between the sticks.

David de Gea has started the season without too many errors, and there’s no reason to change his role as No. 1 from what I can see.

United are blessed to have a keeper as good as Henderson on their books and ready to step in when the time is right.

That was Romero’s job but he has been pushed down the pecking order at Old Trafford since Henderson returned from Sheffield United.

Whatever happens we shouldn’t need to sign a new goalkeeper for a couple of years.