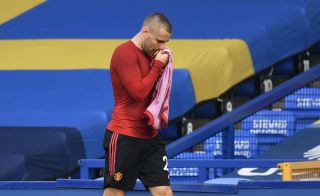 Manchester United have issued an update on defender Luke Shaw’s recent injury which he picked up during the Reds’ recent Premier League clash against Everton.

Shaw, 25, has been with United for six years after moving from Southampton in a transfer costing the Reds £33.75m, as per TransferMarkt.

The English left-back has survived the reigns of three different managers including current boss Ole Gunnar Solskjaer as he continues to play an integral part in his side’s on-field successes.

However, unfortunately for the 25-year-old, he is set to be sidelined for a month after picking up a nasty hamstring injury last weekend whilst playing against Carlo Ancelotti’s Everton.

Confirming the bad news on the club’s official website ManUtd.com, the Reds have said: “It can now be confirmed that the 25-year-old is set for a spell on the sidelines, meaning he could miss upcoming Premier League games against West Brom, Southampton and West Ham, as well as Champions League clashes with Istanbul Basaksehir, Paris Saint-Germain and RB Leipzig.”

However, United do have a very capable replacement among their ranks after they landed attacking left-back Alex Telles from FC Porto during the summer.

Telles, 27, joined from the Portuguese champions for £13.5m, as per TransferMarkt and has already made his competitive debut during United’s Champions League opener against Paris-Saint Germain last month.

However, a recent COVID-19 positive test result has meant the highly-rated Brazilian has yet to make his Premier League debut, although, with Shaw now ruled out for the foreseeable, Telles will undoubtedly be called into action once the current international break is over.