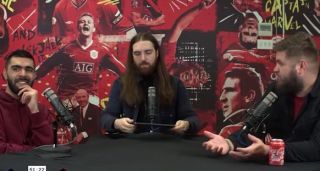 The Manchester United fan channel hosted a watchalong during the match, which saw United victorious winning 3-1 at Goodison Park.

Howson makes the point that Mauricio Pochettino has done “nothing” to warrant the United job after The Independent suggested he is keen on succeeding Ole Gunnar Solskjaer, with the current manager under pressure after a slow start to the season.

“Who not Eddie Howe?,” asked Howson, sticking by his stance that there’s no evidence to suggest Pochettino would do a better job than Solskjaer.

Let us know in the comments section who you agree with?

One response to “Video: Stretford Paddock heated debate over Solskjaer and Pochettino”