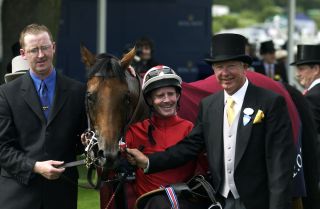 Sir Alex Ferguson’s love for racehorses has been well documented down the years.

The Scot’s part-ownership of Rock of Gibraltar, the 2002 European Horse of the Year, became one of the most infamous examples of horse racing and football coming together.

Football is rifle with money so it’s hardly a surprise that some icons within the sport can be seen attending racing events such as Cheltenham annually. It’s a great day out and the first roar at Cheltenham is infectious.

Ferguson would take his United squad to Cheltenham some years as part of a team building day out, and they always appeared to enjoy it.

The story of Rock of Gilbraltar, however, is an intriguing one.

Ferguson claimed that in 2001 he was gifted a 50& stake in a horse by John Magnier, who at a time before the Glazers was a major shareholder in Manchester United along with J.P. McManus — another major player in Irish horse racing.

The then-United manager wanted greater financial gain of the horse’s lucrative stud fees, but Magnier had other ideas. Ireland’s leading thoroughbred stud owner, who has also been a Senator in the upper house of the Irish Government, insisted that they remain in the control of Coolmore Stud, the breeding operation he owns based in Co. Tipperary.

It didn’t sound like Magnier nor McManus expected the horse to be as good as he turned out to be, as he won seven Group 1 races after an arrangement with Ferguson had been agreed.

This saw the horse’s value rise significantly when it was time to stud.

At a time Ferguson could have done with horse racing advice, he settled for £2.5m but the saga proved costly as it led to Magnier and McManus cashing out and eventually selling the club to the Glazer family.

A horse currently owned by Ferguson is Give Me A Copper, trained by Paul Nicholls, but he hasn’t run since Ascot, December 2019. His last win came a month before that at Wincanton when ridden by jockey Harry Cobden.

Michael Owen, who Ferguson brought to Old Trafford in 2009 as part of a free transfer, also has a strong interest in race horses.

The former England striker runs his own stable in Cheshire which is a Group 1-calibre facility occupied by renowned trainer Tom Dacombe.

Owen has experience riding race horses, too, after coming second on Calder Prince at Ascot in 2017. He also featured in a short film which highlights the world class facilities and care given to Owen’s most valuable players – the equine residents of Manor House Stables.