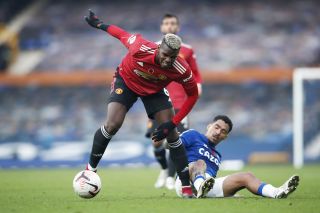 The Frenchman was named on the bench against Everton at the weekend but came on as a substitute and made a contribution to the 3-1 win at Goodison Park.

Pogba, 27, has been in and out of the side all season due to his inconsistent performances. He can’t keep getting away with it when each of the midfield roles need to carried out properly in order for United to win football matches.

For that reason, Fred and Scott McTominay are keeping him out of the team, and that for a World Cup-winner must be a wake up call.

P. Neville clearly rates Pogba higher than we do as he suggests the Frenchman must be selected in the future if Solskjaer is to stand any chance of winning silverware.

“I still think it’s absolutely disgraceful that Pogba can’t get in that team,” Neville told Premier League Productions, quoted by the Metro.

“You can play one of them [Nemanja] Matic, Fred for [Scott] McTominay and then you play Pogba with [Bruno] Fernandes.”

Asked whether Pogba can play a deeper midfield role, Neville said: “Probably not no but I’d rather go out there and score goals, go out there and go for the win playing the Manchester United way with Pogba in the team.

“I know I’ve said about him wanting to leave, not wanting to be there and his inconsistencies but I still think he’s one of the best midfielders around. That’s why I’m thinking: Why is Paul Pogba not in that team?”

It has come down to Solskjaer picking the players he can trust most, and I think that says a lot about Pogba.

He has been linked with a move away from Old Trafford for some time and it’s probably time now to consider an exit plan.

Next up for United in the league — after the international break — is West Brom at home.