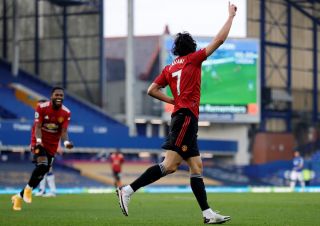 Michael Owen has his say on Edinson Cavani following the Uruguayan’s move to Old Trafford.

Cavani netted his first goal for Manchester United on Saturday afternoon when he came off the bench to score the winner in our 3-1 victory over Everton at Goodison Park.

The Uruguay international has been settling into life in Manchester by enjoying walks up the mountains and scoring against the Toffees.

He knows more goals are required if United are to climb up the table anytime soon.

Owen has made it clear that he’s a big fan of Cavani, but he doesn’t think the former Paris Saint-Germain will get as much service as he would have in previous United teams.

Owen said, as quoted by the Metro: “Manchester United of old, he would have scored hundreds of goals in those teams.

“Now, are they going to get lots of crosses into the box and cut-backs that he preys on?

“It’s a very good signing, I just hope he gets the ammunition to fire the bullets.”

Next up in the league for United — after the international break — is a home clash against West Brom. That really should be another three points that sees our league position improve.

Don’t forget the game in hand too We need to take advantage of that.

With the likes of Bruno Fernandes, Paul Pogba, Juan Mata and Donny van de Beer in and around the team, there should be no excuses for our centre-forwards not getting service.

Not to mention the different I expect Alex Telles to have with his crossing ability.