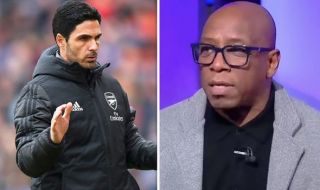 I appeared on an Arsenal podcast immediately after last weekend’s match to give my thoughts, and the giddiness was unreal. Last season’s standings were completely forgotten; the fact United finished third and Arsenal eight points behind in 8th.

This was also when Wright took to his own podcast — Wrighty’s House — to boast about Gunners manager Mikel Arteta making things work.

“Can I just say something, I’m just going to blast it in: If Arteta is managing Man United they are challenging,” former Arsenal striker Ian Wright said in his Wrighty’s House podcast after their 1-0 win over Man United last week.

“You’ve got a manager who, for me, is playing off of vibes, he’s managing off of pure vibes. Look at what Arteta has done in his time at Arsenal,” Wright said.

Although I have great time for Wrighty, that sounds a bit giddy.

After all their hard work against United, Arsenal went out and lost 3-0 yesterday against Aston Villa.

Talk about being humbled.

I would also say it’s safe to say most United fans would pass on the opportunity to see the team managed by Arteta, who if his name was Ole Gunnar Solskjaer would be under immense pressure right now.

The Norwegian is under more pressure than any coach in the league. We’re desperate for him to make his doubters eat their words.

A bizarre claim from Wrighty.