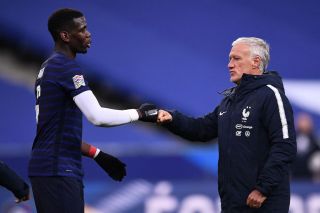 France manager Didier Deschamps has told reporters he doesn’t think Manchester United midfielder Paul Pogba will be happy with his current playing time or role as the playmaker enters his prime years.

Pogba, 27, rejoined United from Juventus in 2016 in a move which cost the Reds’ hierarchy a whopping £94.5m, as per Transfermarkt.

After teaming back up with United after departing from their youth academy in 2012, Pogba has since gone on to be directly involved in 68 goals in 178 appearances in all competitions.

However, after a series of underwhelming performances, the Frenchman has come under intense criticism from fans and pundits alike.

The 27-year-old World Cup winner has recently found himself playing as more of an impact sub rather than an outright starter week in, week out.

Speaking ahead of the next set of international fixtures during a scheduled press conference, Deschamps has weighed in on Pogba’s current situation, as quoted by Manchester Evening News, he said: “Paul [Pogba], I know him well and he knows the group well. He is in a situation with his club where he cannot be happy, neither with his playing time, nor with his positioning.

“He is not in his best period, he has had a series of injuries and the Covid-19 which has hit him quite hard. He needs to find his rhythm.

“The match he had to make last month was good and consistent despite a lack of pace. We cannot however say that he is fulfilled in what he does at his club.

“With me, there is no such concern, but I try to manage it too. When a player is in discomfort in his club, obviously, he is happy to play for the France team. He will tell me about his feelings and as I know him very well, it will go in a positive direction. Even if it is also up to him to make all his efforts.”

Should United look to cash in on Pogba or should they try and tie him down to a new deal? – Let us know in the comments.