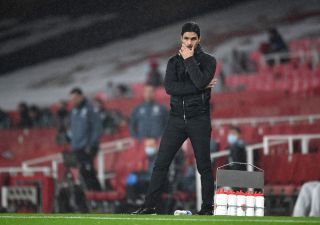 We were all deflated a week ago in the aftermath of Manchester United’s defeat to Arsenal at Old Trafford.

Paul Pogba needlessly gave away a terrible penalty in what was a tight match between the two rivals, and United were ultimately unable to find a response.

A midweek defeat followed — against Istanbul in the UEFA Champions League — and speculation over Ole Gunnar Solskjaer’s job followed, as we discussed on last week’s podcast.

Solskjaer’s former teammate David May took to Twitter before Saturday’s win over Everton to defend the Norwegian. He believes sacking the manager would be the wrong decision.

May took to Twitter again last night — after Arsenal lost to Aston Villa — to question whether the media pressure will turn to Arteta.

You won’t hear too much about Mauricio Pochettino being interested that the Arsenal job, will you?

Obviously, Arsenal, the football club, is nowhere near the size of Manchester United and that comes with extra baggage in the media.

The point I think May is trying to make is that other managers don’t ever feel the same degree of pressure as whoever is in charge of United.

If Arteta were Solskjaer…

United are two points behind Arsenal with a game in hand.