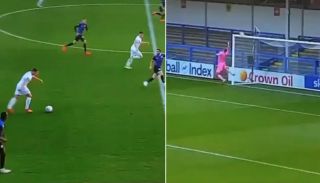 Wayne Rooney’s younger brother has shown that incredible goals run in the family.

John Rooney, who plays for Stockport County, scored from a sublime effort from inside his own half and you should already know what comparisons are being drawn.

The goal against Rochdale will surely go down as one of the best this season?

It helped National League side Stockport County win 2-1 at League One Rochdale.pic.twitter.com/pwZXovQn0a

John, 29, may not have the reputation his brother has on a football pitch but it’s clear he’s been watching Wayne down the years.

The strike is similar to Rooney’s goal for United against West Ham in 2014.

Have we a place for John at United? 😂