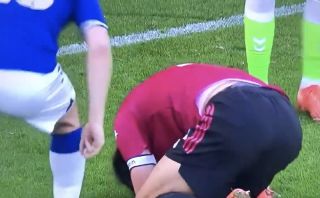 Yesterday’s Premier League match saw United cruise to a 3-1 victory over Carlo Ancelotti’s men, but one of the game’s biggest talking points was whether or not the Reds should have been awarded a second-half penalty.

Maguire and Pickford were embroiled in a contentious penalty decision after Everton’s shot-stopped came hurtling out and clattered into the United captain.

Whilst grounded and recovering from Pickford’s savage challenge, right-back Coleman took the time to hover over Maguire and call him a “you *beep* diving *beep*”

Bit harsh from the Irish defender here, to say the least.