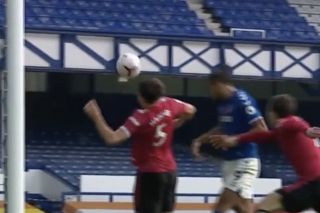 There wasn’t much that beat Maguire in the air during Saturday’s Premier League match after the defender continuously rose head and shoulders above his opponents to see off any potential threat.

Maguire is often subject to some tough criticism, however, credit where credit is due, there is no better moment which showcases the United captain’s best attribute than his perfectly timed and potentially goal saving headed clearance.