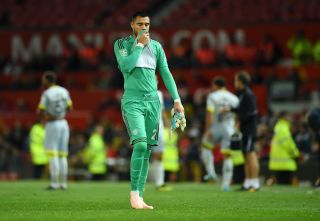 Sergio Romero is believed to be counting down the days to the next transfer window.

The Argentinian goalkeeper has fallen down the pecking order at Manchester United following the return of Dean Henderson.

According to The Sun, Romero is training alone at the moment and he is hoping United will let him leave without a fee in January. The report understands he has begged the club to let him go.

Romero’s contract expires next summer and he can agree a pre-contract with a foreign side from January.

Moreover, Romero’s not getting on the bench for any matches, so it’s expensive keeping a player like that because he still takes a weekly wage.

Romero knows he won’t get the same wages (£100,000-per-week) he gets at United elsewhere. That is not a criticism of the player because he’s been a good servant to the club since joining in 2015 on a Bosman from Sampdoria.

Ole Gunnar Solskjaer already has a potential replacement for David de Gea, for when that time comes, in Henderson. The latter most take priority in the manager’s mind because he’s the future.