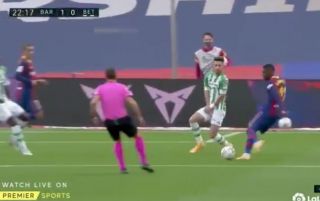 Due to not feeling 100% fresh, Lionel Messi was benched for Barcelona’s La Liga clash with Real Betis on Saturday, but he still came on at half-time to not only score twice but set up another as the hosts cruised to a comfortable 5-2 victory.

Barcelona did score the opener, however, and will feel they should have pushed on from that point but they were unable without the introduction of Messi at the break.

The scorer of Barcelona’s first goal, Ousmane Dembele, was strongly linked with a move to United in the summer after it became clear that Ole Gunnar Solskjaer would miss out on prime target Jadon Sancho, as per The Mirror.

United still need a right winger because you can see most weeks that most of our attacks go down the left flank and there’s not adequate balance in our playing system. We would be a lot more potent and less predictable could we attack just as well from the right flank.

For Barca’s first goal against Betis, Dembele shows what he can do when fit and in form. His injury record is a concern but watch how he cuts in and strikes home.

1-0 Barcelona. Ousmane Dembélé cuts inside and fires it in the top left corner with a thunderbullet. Applauds from Messi in the stands. pic.twitter.com/aQBPTG96Ya

With pace like Dembele’s you won’t find many defenders who will beat him in a race. It’s just a matter of staying fit for the Frenchman.

Ousmane Dembélé cuts inside from the right wing and SMASHES one into the back of the net! 💥

A fantastic finish to put Barca in front 🔵🔴 pic.twitter.com/BZ7UxbdMa5

Should United make a January move for Dembele?