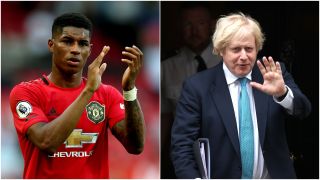 Is there anything Manchester United forward Marcus Rashford MBE can’t do?

Rashford, 23, started in United’s 3-1 win over Everton at Goodison Park on Saturday before revealing that he has spoken with Prime Minister Boris Johnson.

The Manchester United academy graduate has been pushing to end child food poverty throughout the coronavirus pandemic. He set out to ensure that children get free school meals through the holidays — because no child should go to bed hungry.

Johnson had been against the idea of offering free school meals during holidays but he’s gone down the route of another U-turn amid pressure from Rashford.

Hours after United’s 3-1 win over Everton, Rashford tweeted: “Just had a great conversation with the Prime Minister, now is the time for collaboration.”

In a statement, he said: “There is still so much more to do, and my immediate concern is the approximate 1.7 million children who miss out on free school meals, holiday provision and Healthy Start vouchers because their family income isn’t quite low enough, but the intent the government have shown today is nothing but positive and they should be recognised for that.

“The steps made today will improve the lives of near 1.7 million children in the UK over the next 12 months, and that can only be celebrated.”

Johnson rightly caved in and has agreed to extend free school meals and holiday activities to cover next Easter, summer and Christmas. He told Rashford that £170m was being set aside to help feed disadvantaged children.

Rashford and fellow child poverty campaigners can celebrate now knowing their voices have been heard.

Food Foundation’s executive director Anna Taylor issued a statement in response to this via Twitter.

A win for disadvantaged children
A win for the brave parents and children who spoke up about experiences of food poverty
A win for the 1.1m who signed @MarcusRashford petition to #EndChildFoodPoverty

Read full details on the package & our response here:https://t.co/bR5LZmhz65 pic.twitter.com/ayIBIDlXKU

It really shouldn’t come to this; a government being forced into a U-turn by a footballer for something as serious as child food poverty. It proves that Johnson and his Tory friends are completely out of touch, but Rashford deserves the ultimate praise for his efforts which have been non-stop.

A number of businesses and councils stepped up in recent times while the government couldn’t be bothered… More than one million people signed Rashford’s petition calling for an array of measures to end child food poverty.