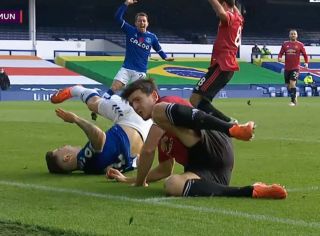 Some might say Harry Maguire was a lucky boy at Goodison Park on Saturday.

And this time around, we are not talking about being lucky to escape a nasty injured from Jordan Pickford crashing into him like the England goalkeeper did to Virgil van Dijk a few weeks ago, which potentially rules the Liverpool defender out for the remainder of the season.

Another incident occurred later in the match when Maguire spotted danger developing inside United’s box.

He dashed quickly across his box to prevent Lucas Digne creating a chance which could have easily led to a goal for Everton. In doing so, Maguire slides in and wins the ball first. He leaves a little bit on Digne but we must not forget this is a contact sport.

Check out the tackle below, courtesy of RMC Sport:

The United skipper rightly got away without any punishment.

Let us know what you thought about the tackle in the comments section below.