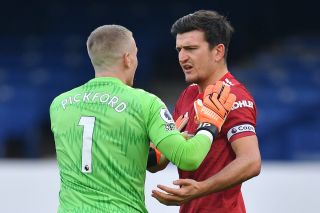 We thought Manchester United should have had a penalty against Everton on Saturday.

Jordan Pickford, a goalkeeper who on his own is worthy of pay-per-view, went in on Harry Maguire with a high-footed lunge while attempting to win the ball in the air.

The United skipper cleared up the controversy surrounding the incident with Pickford in a post-match interview with United’s official website.

Pickford’s knee connected with Maguire’s chest before the ball went out of play. The incident was checked by VAR but still nothing was given.

Maguire thinks it would have been a ‘soft’ penalty. He explains: “I just explained this in there, I personally don’t think it was [a penalty].

“I think maybe I fouled Jordan first. I did put a hand into his chest when he went to catch the ball and I did feel contact on my knee.

“I felt like I probably pushed Jordan before and I know everyone’s probably trying to jump on him dropping the ball but I did feel like I pushed him. I’d say [a penalty] would have been a little bit soft.”

There’s nothing like a bit of honesty — but Maguire could also be trying to take his mate Pickford out of the spotlight. They both play for England and they’ve both been criticised in the media this season.

Pickford got a lot of criticism when his efforts to win the ball in the Merseyside derby resulted in a serious knee injury for Liverpool’s Virgil van Dijk, potentially ruling the centre-back out for the rest of the season.

Maybe VAR took Maguire’s hand on Pickford into account when deciding not to award a penalty?