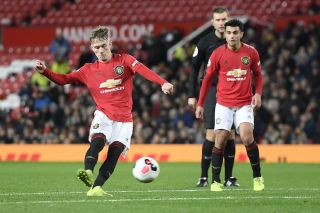 It is about time we discussed over Ethan Galbraith, long overdue, if I am honest. His name might be familiar to those who watch youth games, as the player has been very important for United at youth level. Ethan has been attracting the attention of various clubs in Europe and rightly so. The simple game he plays, the wonder goals he scores, will not have gone unnoticed and as someone who watches the Reserves’ play, Ethan deserves to get the attention he needs and deserves, to make his big break in the first team.

While this week has not been brilliant for Manchester United, as the team not only did lose in the Champions League, but the atmosphere and especially the level of the game from the players have been horrendous, there a few positive we can look up to. My attention at this point shifts in the Reserves’ game as Manchester United U23’s won against Brighton and Hove Albion 5-2 on Friday. Even though he did not score, it was another great performance from the Northern Ireland international, Ethan Galbraith.

His performances are in the rise and while some of his teammates from last season headed on loan, Ethan remained at the club and in October he signed a new three year contract with the club, with an option for an extra year. Good news does not finish here as he was also called up for the Northern Ireland in the upcoming games in November.

The Northern Ireland manager spoke highly of the player as he announced the team for the Nations League fixtures, admitting that his involvement is based on merits with the player shining at U23’s level (via Belfast Live):

“It has been right for the last couple of months that Ethan played for the under-21s and got that experience. He is now playing regularly for Man United’s under-23s and most times he is the best player on the pitch. And he has been in and around Ole’s first team set-up.

“I believe he is ready for that step up, and he now has to come in and show all the traits he has done with Man United. We have seen him grow as a person, as well as a player on the pitch. And if he brings that into the camp with him, he will take more strides forward.

“Hopefully, it’s the start of a long career for him. Hopefully, he relishes his time from the start in this squad, rather than coming in from the Under 21 squad. He has earned his right with the way he has gone about his play for the last six months.”

Last season, I was looking forward to watch Levitt, Garner and Galbraith, but I felt that somehow his performances were overshadowed by the United duo of James Garner and Dylan Levitt. This is not exactly something negative I am referring to, as he learnt a lot from the duo, but his performances were being overlooked. The stage is all for him this season and he has been making the most out of it. His absence was notable as the U23’s have had a not such a good start (at least how I expected them to perform) in their return in the Premier League 2 Division, losing to Leicester in the opening game of the new season.

Then again, the team needed more time, but Ethan Galbraith has become a key player and after missing a few games through injury, the results just were not there. Since his return, the U23’s have been holding well and the midfield seems to have found its general. What makes the player so special anyways, would ask someone who has not watched him play. Well, many have compared him to a United legend, Paul Scholes. Huge and bold statement, isn’t it?

At this point it could be early to make this comparison, but United fans need to understand the type of player he is. His characteristics are valuable to the game the team tries to approach, especially in the win against Brighton. Despite going three goals up, the team needed someone to retain position several times in the first half and redistributing the ball well, bringing the usual calmness in the United half and sending the team forward. Those vertical passes he delivered, the game reading and the range of his passes are probably way too good for Premier League 2. As Brighton were coming for United’s lead, it was Galbraith who not only kept the team together, but kept pushing forward, going for Brighton’s defence.

By the time he was substituted to make place for Charlie McCann, United had recovered their three-goal lead and secured three points, not making the same mistakes as against Arsenal. In such crucial moments of the game, Ethan showed once again the importance on the team, also making a statement to those who have been keeping an eye on him and kept the player at the U23’s to help with the transition in the first team.

The qualities of another Paul Scholes are there, as the Northern Ireland international has been helping the Reserves win games, but also showing everyone that if he is to be called up with the big lads, Ethan will not tremble, but he will be ready. Considering the necessity of a number six, Ole has another option waiting for his chance. Probably it is still early, but a few cup games would be that little reward he deserves.