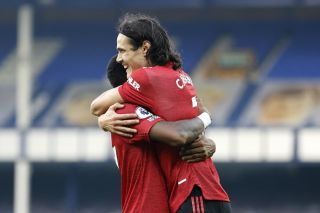 The former Paris Saint-Germain forward and current all-time record scorer came on against Everton yesterday and managed to score his first goal for the club, thanks to a generous assist from Bruno Fernandes.

Cavani, 33, also had a shout for a penalty turned down. He did well to stay onside before hitting the back of the net after Fernandes’ through ball.

The skipper was impressed with Cavani’s contribution and everyone will be hoping that he’s near the starting line-up, which depends on match sharpness because he didn’t have the best summer of preparations but it’s good to see him scoring goals.

“He worked tirelessly up there and did the dirty work and he got his rewards right at the end. I think he’s going to be a big player for us, he’s going to score goals.

“He knows where the back of the net is and I’ve seen that in training a few times already. He’s just getting up to speed in terms of his training and workrate but he’s going to be a big player for us.”

Maguire found himself caught in the middle of a controversy during the game, which we’ve already covered on the blog.

He clashed with one of his England teammates in what looked like a stonewall penalty to us, but Maguire played it down in an interview with the club’s official website and said it would have been a ‘soft’ penalty.

Maybe he wanted to appear to be giving Pickford support at a time a lot of people are criticising the England goalkeeper.

Maguire was happy with Bruno Fernandes’ display against the Toffees — after scoring a quick-fire brace (but offering his second to Marcus Rashford who celebrated like it went in off his head..) and assisting Edinson Cavani.

“I haven’t seen it [the second goal] back, but Bruno was excellent.

“He came under a little bit of stick on Wednesday night but he’s a big character and a big leader. He’s reacted brilliantly and does his talking on the pitch.

“I’m delighted he’s got a couple of goals or whatever you want to call it, a goal or an assist.”