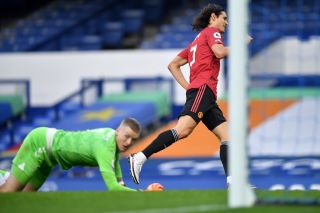 Manchester United striker Edinson Cavani scored his first goal for the club in a 3-1 win over Everton at Goodison Park after being set up by the magnificent Bruno Fernandes.

Bruno Fernandes was the star of the show — after scoring a quick-fire brace and assisting the winner — for his goal contributions that won the match. Still, not necessarily the best performer (I would give that accolade to Harry Maguire or Fred) on the pitch.

Speaking to BBC Sport, Fernandes explained why he set up Cavani instead of going for a goal which would have been a hat-trick for the Portuguese star (potentially his first for the club):

“The point is winning the game,” Fernandes is quoted by The Mirror.

“[I set up Edinson Cavani because] for a striker it is important to score for his confidence, he will be important for us and the first goal will give him confidence.

“Every game is important, we are not good in the league so these three points are important.

“We have a game in hand so we can go closer to the top of the table.

“We will get better if we do the right things.”

It was great to see United come away from Goodison Park with a win to relieve some pressure after a hard week for the manager and players.

Two consecutive defeats put Ole Gunnar Solskjaer under immense pressure after losses to Arsenal and Istanbul Basaksehir. We’ve seen him in charge for over 100 matches and he needs to make this team more consistent.

Hopefully we can look back on the win over Everton down the line and be able to say it was the turning point for Solskjaer. A morale-boosting win should see the players excited about coming back after the international break and firing to get a winning run together.

Cavani is still getting used to life in the Premier League and has had to settle for a spot on the bench, though if he can start scoring goals like he did against Everton it won’t be long before Anthony Martial is looking over his shoulder. The Frenchman could also do with adding more goals to his tally, like he did last season.