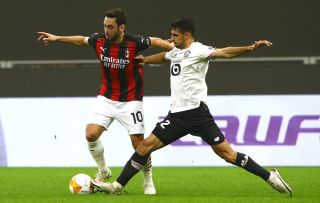 Manchester United have reportedly been joined by Inter Milan in the race to land AC Milan midfielder Hakan Calhanoglu on a free transfer once his contract expires next summer.

Calhanoglu, 26, joined AC Milan from Bayer Leverkusen in 2017 in a deal which cost the Rossoneri £20.97m, as per TransferMarkt.

The Turkish playmaker who can operate as both a left-sided attacker and a number-10 has been directly involved in 67 goals in 139 matches in all competitions since his arrival in Milan.

However, as his contract edges closer to its expiration date, some of Europe’s biggest clubs are keeping a close eye on the midfielder with a view to taking him on a free transfer next summer.

With just over six-months left on his current deal, AC Milan’s Calhanoglu will be available to talk to clubs as early as the new year and one of those clubs strongly linked is Ole Gunnar Solskjaer’s United.

However, according to a recent written report from La Repubblica (via Sports Witness), United have been joined in the race to the land the highly-rated midfielder by AC Milan’s arch-rivals Inter Milan.

The report states that Calhanoglu is open to joining both clubs but as time ticks on more clubs are expected to enter the fray.