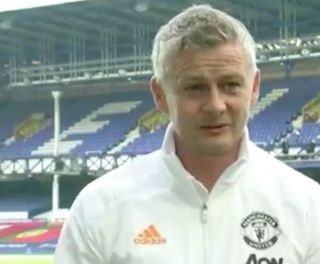 Ole Gunnar Solskjaer hopes his four Manchester United changes can help his side respond to poor defeats to Arsenal and Istanbul Basaksehir with victory over Everton at Goodison Park.

David de Gea returns in goal after Dean Henderson’s Champions League debut in midweek and Victor Lindelof replaces Axel Tuanzebe after recovering from a back injury.

Fred and Scott McTominay return to the starting XI after missing out in Istanbul and Solskjaer hopes the duo can provide energy and enthusiasm to the midfield pivot.

Solskjaer didn’t sound too confident over Lindelof’s fitness but hopes the Swedish defender can complete the full 90 minutes as he manages a back problem.

Juan Mata retains his place in the side and Solskjaer wants the Spaniard to get on the ball as much as possible to cause danger for the opposition.

The Reds need to win at Goodison Park to relieve some of the mounting pressure on the manager. Defeat, on the other hand, is unthinkable and could put United as low as 17th heading into the latest international break.

Listen to Solskjaer’s verdict ahead of kick-off below, via MUTV: