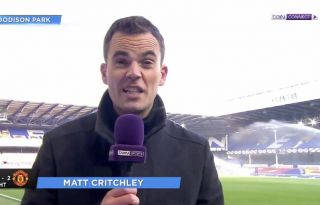 Manchester United have a 2-1 lead at Goodison Park at half-time.

Everton scored the opening goal after some sloppy defending, but Bruno Fernandes’ quick fire brace put the Red Devils ahead.

After watching the first-half you would have to say United deserve their lead, although it hasn’t been the most convincing of displays.

However, it’s encouraging to see us bounce back after going behind.

beIN SPORTS reporter Matt Critchley gave his take at half-time and was clearly impressed with United’s work-rate against the Toffees.

He also tipped a feud in the second half between Fernandes and Everton full-back Seamus Coleman.

Watch his take below:

Manchester United have shown plenty of workrate, could their be a rivalry between Bruno Fernandes and Séamus Coleman about to boil over in the second-half?@MattCritchley1 has the latest! #beINPL #EVEMUN 📺 HD11