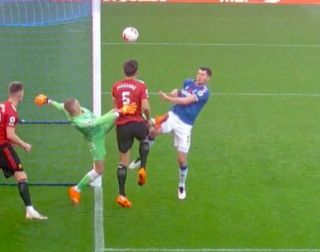 Manchester United have somehow not been awarded a potentially decisive penalty after the latest calamity from Everton goalkeeper Jordan Pickford.

Ole Gunnar Solskjaer’s men lead 2-1 late into the second-half at Goodison Park thanks to goals from Bruno Fernandes.

But they have denied denied the chance to double their lead after referee Paul Tierney and VAR Michael Oliver both concluded that skipper Harry Maguire was not fouled in the area.

Pickford dropped the ball from a seemingly innocuous free-kick and tried to salvage the situation by kicking clear.

The England ‘keeper makes contact with the knee of Maguire, who was sandwiched between him and Michael Keane as he tried to cause havoc in the box.

See the video of the incident below. Footage courtesy of BT Sport.

Pickford wipes out Harry Maguire but the referee somehow says it's not a penalty!
pic.twitter.com/gQ9ogRwYLG