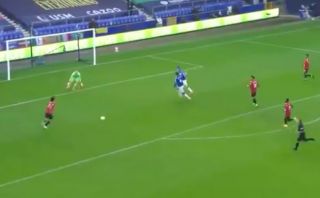 Edinson Cavani has scored his first Manchester United goal to seal a vital victory over Everton at Goodison Park.

Bruno Fernandes was the difference for Ole Gunnar Solskjaer’s side and he was unselfish to refuse a hat-trick and lay the ball on a plate for United’s new Uruguayan forward.

The Portuguese playmaker netted two first half goals in response to Everton’s early opener and kept his composure at the end to expertly take advantage of a two-man advantage on the break.

Cavani has come close to finding the net for United on several occasions in five substitute appearances and it’s fantastic to see him get off the mark.

The crucial win will relieve some pressure on Solskjaer heading into the international break.

A big result for Solskjaer and Man Utd! pic.twitter.com/roxOZZScer