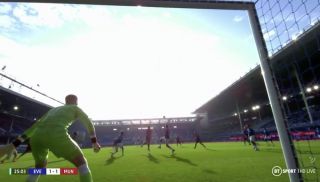 Manchester United have taken all three-points away from Goodison Park after beating Everton 3-1 in a must-win game for Ole Gunnar Solskjaer.

However, Portuguese midfielder Bruno Fernandes stepped-up when his side needed him the most and after bagging a brace set team-mate Edinson Cavani up deep into the second-half.

Fernandes’ three direct goal involvements helped secure United’s win today but arguably the pick of the bunch was his equaliser in the 25th-minute.

The 27-year-old rose highest from a Luke Shaw cross to head an unstoppable ball beyond Jordan Pickford.

Here is a chance to watch it back from all angles.