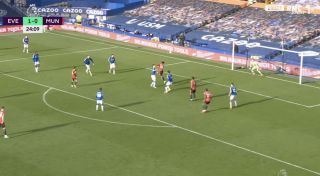 Manchester United midfielder Bruno Fernandes has dragged his side into the lead in today’s early Premier League kick-off against Everton after scoring an unstoppable header followed by a curled effort.

The Portuguese creative midfielder has arguably been United’s best player on the pitch after the opening 30-minutes after showcasing desire to win every ball.

United fell behind to a Bernard goal after just 19-minutes but it didn’t take the Reds long to get back on level terms and soon got themselves into the lead.

Fernandes rose highest after a cross from left-back Luke Shaw allowed the midfielder to guide the ball home past Jordan Pickford with his second coming just minutes later.

United will hoping to take all three-points from today’s game but should they fail and leave Goodison Park empty handed could find themselves as low as 17th in the league table.