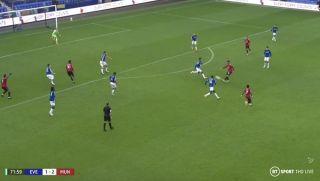 Manchester United, through the help of midfielder Bruno Fernandes have beaten Everton 3-1 to make today’s win their seventh consecutive away win.

Fernandes, 27, was named as BT Sport’s Man of the Match after the Portuguese midfielder had a hand in all of his side’s three goals this afternoon.

The 27-year-old scored the Reds’ first two goals and finished his afternoon’s work off with a neat lay-off to assist new striker Edinson Cavani.

Fernandes was unlucky not to have four direct goal contributions to his name today though after he played a superb chipped through-ball to team-mate Marcus Rashford.

Unfortunately United’s number-10 was unable to convert but let’s not take anything away from the genius that is Fernandes.