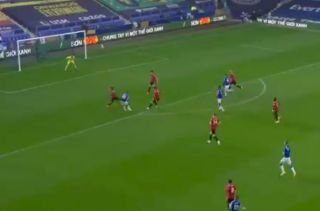 Manchester United have made the worst possible start to their Premier League clash against Everton at Goodison Park.

Ole Gunnar Solskjaer’s men have been lethargic early on, despite the desperate need for a response after poor defeats to Arsenal and Istanbul Basaksehir.

And the manner of Bernard’s opener on his first Premier League start this season will be particularly frustrating for the United manager.

Victor Lindelof and Aaron Wan-Bissaka failed to take responsibility and pick up their men, a common theme with United’s defenders at the moment.

Lindelof was bullied by Dominic Calvert-Lewin in the air after a Jordan Pickford long ball, and Wan-Bissaka is far too slow to close down the shot from the Brazilian forward.

On his first Premier League start this season, Bernard opens the scoring for Everton against Man Utd!

Calvert-Lewin wins the first ball and the Brazilian makes no mistake with the finish 👌 pic.twitter.com/vXuu3xY5ie