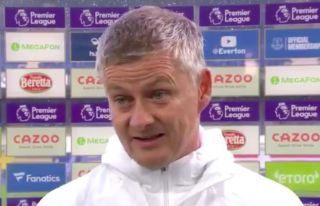 “The authorities set us up to fail.”

Ole Gunnar Solskjaer was in no mood for celebration after relieving mounting pressure as Manchester United defeated Everton 3-1 at Goodison Park.

The United boss instead embarked on a rant about the ‘joke’ fixture schedule that has set his side up to fail over the past week.

United were forced to play on Saturday lunchtime after travelling to Turkey to face Istanbul Basaksehir three days earlier in a Champions League tie.

Solskjaer insisted his players deserve better than being set up to fail and reserved praise for their tremendous character at Goodison Park.

He added that the ridiculous fixture schedule has cost Luke Shaw an injury – the extent of which we are not yet aware of.

Bruno Fernandes’ two goals and assist helped the Reds to a crucial victory over Everton, but the key talking points will now surround Solskjaer’s anger with the authorities over their ‘shambolic’ fixture schedule.

Listen to Solskjaer’s rant below, footage courtesy of BT Sport:

"The kick-off time set us up to fail."

"It's an absolute shambles. The boys deserve better."

Ole Gunnar Solskjaer is furious that Man Utd have had to play on Saturday afternoon having played in Turkey on Wednesday night.