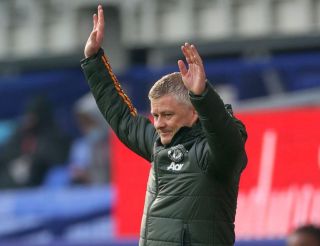 A huge result for Manchester United and Ole Gunnar Solskjaer.

The Reds head into the international break with some pressure lifted after a gritty 3-1 victory over Everton at Goodison Park.

Victory on Merseyside is never easy, and it wasn’t made any easier either by footballing authorities described by Solskaer post-match as a ‘shambles’.

Solskjaer believes his team were set up to fail with a rapid turn around after a draining trip to Turkey, but his selections and tactics were vindicated in a performance that highlighted the unity that remains.

Three points over Carlo Ancelotti’s side won’t completely silence Solskjaer’s critics, and perhaps rightly so given the cyclical nature of United’s form.

But what cannot be denied are the facts that the Norwegian coach has made the Reds incredibly hard to beat away from home in the Premier League.

As noted by Sky Sports, United have now won seven successive away league games, equalling the longest away winning run in the club’s history which was set by Sir Alex Ferguson in 1993.

The start of the season has been fraught with inconsistencies, but United’s away form remains the constant that is keeping Solskjaer fighting.