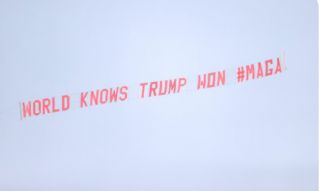 There’s been a lot of unrest in the United States over the past four years and it looks like that will continue as Donald Trump spits his dummy out.

The current President of the United States has leaned in to the idea that the high court should intervene in the election. He’s unhappy with how he’s losing and claims the election has been rigged.

His fans aren’t happy that Joe Biden is on the verge of winning the US Election.

Trump’s fans, however, are not exclusive to the United States — but, even there, it has now been proven they are vastly outnumbered.

In a cry for attention (something Trump has always done), someone has paid for a plane banner to be flown over Goodison Park, suggesting that the election is being rigged. Exactly what Trump wants you to think.

A banner reading ‘World Knows Trump Won #MAGA‘ has been spotted flying above Goodison Park and the Liverpool area.

Nobody has claimed responsibility but I wouldn’t be surprised if it came from the White House itself.