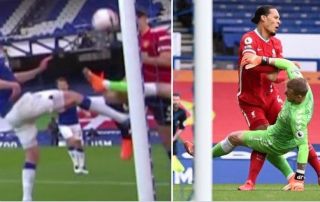 Jordan Pickford is pay-per-view worthy. The England goalkeeper has become a circus act between the posts for Everton.

Liverpool centre-back Van Dijk had surgery on the knee injury he received when the Everton goalkeeper clattered into him during the Merseyside Derby this season.

But he jumped in dangerously on Harry Maguire this afternoon after United travelled to Goodison Park.

Luckily Maguire was left uninjured but the controversial incident was ignored by referee Michael Oliver and VAR – despite being checked!

It was a definitely penalty.

It was a dangerous tackle and we still can’t believe Oliver allowed it without caution.

On Twitter it was compared to Pickford’s tackle which ruined Van Dijk’s season. The Liverpool defender will be lucky to play again this season, which is a huge blow to Jurgen Klopp’s season.

Not only does Pickford do whatever he wants. He somehow gets away with it! 😲 pic.twitter.com/N2Xhbp4278

His own international teammate too!