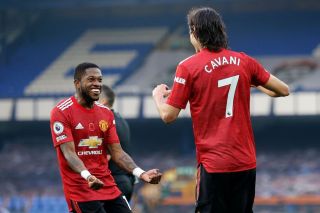 Bruno Fernandes was the deserved recipient of the man-of-the-match award after proving the difference in Manchester United’s vital 3-1 victory over Everton at Goodison Park.

The Portuguese playmaker scored twice and laid on an assist for Edinson Cavani late on as the Reds lifted some pressure on Ole Gunnar Solskjaer heading into the international break.

Fernandes will steal all the headlines for his decisive impact, but the importance of Fred’s industry in a double midfield pivot alongside Scott McTominay should not go without praise.

Fred, who has been maligned for large parts of his United career, was outstanding yet again in most aspects of his play.

The Brazilian midfielder’s enthusiasm lifted the Reds after they fell behind to compatriot Bernard’s opener in poor circumstances.

Fred’s energy levels can never be disputed but his proficiency in the ball does often come into question in debates concerning Solskjaer’s best midfield pairing.

But while he provided the protective blanket Solskjaer needed for his forwards to thrive, Fred also initiated attacks through precise line breaking passes and driving runs.

Fred seldom lets Solskjaer down when selected and he vindicated his selection yet again in a game that held such importance.

The 27-year-old passed prudently, and completed six ball recoveries on an impressive showing on Merseyside.

See Fred’s stats in full below, via popular statistician Statman Dave on twitter:

Fred’s game by numbers vs. Everton: