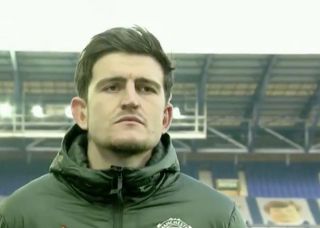 Harry Maguire has had to deal with a lot of criticism in recent months but he performed superbly against Everton and gave a passionate interview with MUTV after the match.

It looked like Maguire was getting something off his chest. As captain it must hurt when your leadership skills are called into question, but the way in which he spoke after the game sounded like he wanted to address those beliefs that only really have a place on social media.

The skipper was excellent against Everton — won everything in the air and was alert pretty much throughout — and he deserves his moment in the spotlight.

Maguire says people don’t want Manchester United to do well because of our previous successes and he’s not wrong.

Manager Ole Gunnar Solskjaer used his post-match interview to hit out at the authorities over United’s fixture schedule.

Victor Lindelof, who missed the midweek defeat away to Istanbul, came back into the side and built on his improved run of performances.

So there are reasons to be positive, even if many of us couldn’t see it in the past week.

The problem is consistency.