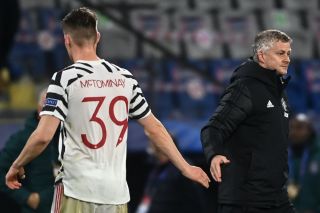 Manchester United’s latest defeat to Istanbul Basaksehir was perplexing more than bleak. Bleakness is something the club has become accustomed to over the years but it is the perplexed nature of the defeat which has come to define the club in more ways than one. Be it the things that happen on the pitch, in the transfer market or in the boardroom, no one is ever sure about who to blame amidst the carcass at the Theatre of Dreams.

Take the performance in Istanbul on Wednesday. With Okan Buruk’s men sitting in a low block, United had no idea how to break them down. When teams sit in a low-block, it is a footballing basic to have width in the side to stretch them. But like they had in the game against Arsenal, Ole Solskjaer’s men had too many midfielders and no width at all. The players in the middle though, overcomplicated things for the whole of 90 minutes and mustered just one shot on target in the second half. They did all that despite Ole clearly asking them to play it quicker.

It can be argued that the game exposed many flaws in the way that the United players have been coached – as so-called wide players came deeper to receive the ball instead of moving forward to create space for the full-backs. Things like these suggest that Ole hasn’t been doing the job exceptionally and his decision to field so many midfield players when needing width has cost United recent games against Arsenal and Basaksehir themselves.

That said, a case can be made of the fact that the players got their basics wrong. When they had easier passing lanes to exploit, they took extra touches and then resorted to playing the ball sideways. In many ways, they over complicated things and allowed Basaksehir to remain in shape. More so, it is easy to cast our minds back to the time when Solskjaer’s main targets were Jack Grealish and Jadon Sancho.

Both the Englishman aren’t just star players that would’ve enhanced United’s brand names. They would’ve been massive for United in their constant struggles to break low blocks down. They lure players into them, go past them and create chances. Sancho would have added width to a team that hasn’t had much of after Sir Alex Ferguson’s departure.

The last proper winger that United had was Antonio Valencia and it is no coincidence that since he transformed into a right-back, the club have constantly had drab 0-0s or 1-1s at home against teams that sit deeper. When Ole wanted a readymade star right winger who can play on the left too, he was handed two young wingers who might not be ready to start regularly this season.

Because of that, a lot of the blame also goes back to the board, which usually lets the manager down with its constant incompetency. In an alternate world, United would’ve beaten Basaksehir on Wednesday and would’ve been in a much better situation right now. But that is what the club has been about – what ifs, buts and a perplexed nature of blame that gets thrown around far too often.

Everyone has a clear idea about what the ‘real’ problem is at United but when things play out on the pitch, fans express frustration at the manager and start to forget about the ‘real’ issue even when the indirect blame lies with the ‘You Know Whos’ at Old Trafford. It is a practice which has become a norm – like a time loop from Netflix series ‘Dark’. Perhaps, that difference in opinion comes from United having a global fanbase and people in Asia won’t have the same opinion as the people in England.

It isn’t like Ole has no tactics, making claims about him being a PE teacher pretty ridiculous. There were clear signs of the team having an identity last season and there seemed to be a plan which was working, considering the third-placed finish in the Premier League. Ole had this picture in mind where he would be operating with the likes of Sancho, Grealish, Jude Bellingham and perhaps with Dayot Upamecano too. Despite constant guarantees from the board about getting his own targets, none of them came.

This left Ole with some players that he didn’t urgently need and players that he never planned for. The way things are going right now, Ole’s approach seems a bit like that of Unai Emery at Arsenal – being unsure about what the roles of midfielders are and trying to shoehorn them into the team for the sake of it. And why won’t he be unsure if he didn’t plan for having this set of midfielders over the summer? He planned for something different and he got something else.

It is fair to say that he’s not brought the best out of the players though and it is also fair to say that another manager can do better with this team. But this is a narrative which gets thrown around far too often at Old Trafford too and after a point, a familiar sort of confusion begins to creep in. As an example, one can go back to the point about United not having wingers after Sir Alex’s era. There has always been confusion about the roles of so many players at United and that harks back to the constant chopping and changing of managers.

Take Marcus Rashford and Anthony Martial as examples. There has never been 100 percent certainty about what their real positions are. Ole did a great job at determining that last season but doubts have come creeping back in again. It sometimes reaches a point where even the players don’t know what their real positions are. As for Paul Pogba, what is his real role in the team? Perhaps, no one will ever know that at United till the time the Glazers are there and managers keep changing.

There are players in the team who have suffered from this constant instability. These players exist in defence and in attack and their lack of development will continue to be a concern, considering the sort of loop the club has been stuck in. Ole clearly fixed these issues for quite a long period and identified the best positions for Martial, Rashford and Pogba. He identified that United needed a winger and a progressive ball carrier who is press resistant. He identified the fact that United need a left centre-back, as a player like that allows for quicker transition from the back.

He didn’t get those players at all and that is no disrespect to the players that did come in. Despite everything, this confusion lingers at United and for fans, it takes the joy out of the very purpose of supporting the club. No one knows who to blame, similar to how some players don’t know their real positions and similar to how the manager is struggling to see what formation to use at what point.

There is still a chance that Ole turns it around since he knows how to handle these situations. If he does come through this period with flying colours, there will be a time when the same old perplexed conversations emerge. After all, that is what Manchester United have become – a befuddled club left with no one subject to blame, almost like a factory that doesn’t know exactly what it is producing.