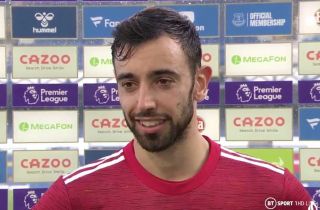 Bruno Fernandes will make all of the headlines after Manchester United’s win at Goodison Park.

Everton were leading the game until Fernandes’ quick-fire brace turned the game on its head. The Portuguese playmaker scored with his head and managed to his the back of the net with a cross for his second.

It’s a big win over a decent side that will lift some of the pressure off Ole Gunnar Solskjaer’s shoulders, but United know they need to come back after the international break and make a statement by winning matches and showing more consistency.

Otherwise the manager will be out of a job.

Fernandes spoke to BT Sport after the match and joked that he will give Marcus Rashford United’s second goal, which we feel should go down to the former Sporting Lisbon star…

He adds that the dressing room know what they need to do to turn around this situation and climb back up the Premier League table.

"Marcus can take the second goal, not a problem for me."

"We know in the dressing room what we have to do."

At the end when Fernandes was on course for a hat-trick he played in Edinson Cavani to ensure the Uruguay could chalk off his first goal for the club.

A big result for Solskjaer and Man Utd! pic.twitter.com/roxOZZScer

It’s great to have a player happy to share the goals around with his teammates. And it does Fernandes’ assist tally no harm.